“I loved Thai food the first time I tasted it. It seemed to me to bear the same relationship to Chinese food that Italian did to French: It was simpler and more immediately satisfying, and it let the raw materials show through more vividly. And I thought Jitlada did it better than anyone. Named after the royal palace in Bangkok, Jitlada opened in the late ’70s and quickly earned an enthusiastic following among food lovers both Thai and otherwise. All went well until the late ’90s, when the restaurant’s original owners sold the place and returned to Thailand.

Then, in 2006, the restaurant changed hands again. The new owners were Sarintip “Jazz” Singsanong and her brother Suthiporn “Tui” Sungkamee, two of 12 siblings from the ancient province of Nakhon Si Thammarat, in southern Thailand, near the Malaysian border—also the home province, coincidentally, of Jitlada’s previous owners. Singsanong, the first of her family to immigrate to the U.S.—she arrived in 1979 with the proverbial (as she says) “two hundred dollars and one suitcase”—had studied hotel management in Bangkok. She enrolled at L.A. City College to learn English and found part-time jobs in local restaurants before landing a job at the Biltmore Hotel. Little by little, she brought her family over, and she and Tui, who owned four restaurants in Thailand, began working with another brother, John, at a Thai restaurant in Westwood called Emporium, which is still in business. “We couldn’t really do authentic home cooking there,” says Singsanong, “because our customers didn’t like things too spicy.” Her dream was to have a restaurant that could and that would offer Tui a showcase for his talents. When Jitlada became available,  they took it over. 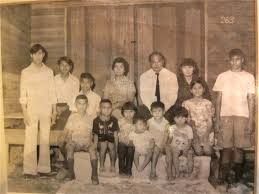 Not wanting to alienate customers expecting the usual Thai dishes, Singsanong and her brother left the old menu more or less intact while upgrading the quality of the cooking, but they also added a sub-menu, written in their regional dialect, of about 40 home-style southern Thai specialties. One evening, a visitor from Chicago happened upon a Jitlada takeout menu in his hotel lobby and noticed the untranslated section. Intrigued, he went to have dinner at the restaurant and ended up getting Singsanong to explain all the southern Thai dishes for him. When he returned home, he posted a translation of the regional menu—along with photographs of many of the dishes and a highly favorable report on the restaurant—on a Chicago area food lovers’ website, LTHforum.com, under the byline Erik M. Good food news travels fast, and word of this treasure trove of unusual dishes soon got back to L.A. Customers started arriving at Jitlada with the translated menu in hand (it is now offered with the regular one), anxious to try exotic-sounding fare they’d probably never heard of before. I doubt that very many of them were disappointed.

The restaurant does the generic Thai standards (saté, tom kha soup, pad Thai, etc.) very well, but their appeal lessens when the alternatives include dishes like that crisp catfish salad or small, sweet soft-shelled crabs, crisp-fried, halved crosswise, and moistened with turmeric-scented yellow-curry sauce, or shredded-mango salad tossed with shrimp, cashews, and chiles. “The recipe is from our grandma,” says Singsanong. Fresh turmeric, a spice much appreciated in southern Thailand, flavors a deep-fried whole sea bass covered with crisp dark brown bits of fried garlic; neither the turmeric nor the caramelized garlic betrays the hint of bitterness that both often do. (“Not many

people know how to fry garlic,” Singsanong says. “It’s a question of exactly the right temperature.”) The “rice salad” called khao yam, a specialty of the province of Songkhla, is an emblematic classic of southern Thai cuisine. Here, it’s basically a heap of perfectly cooked rice topped with a jumble of chopped or shredded ingredients meant to be stirred in, among them mango, bean sprouts, green beans, coconut, lemongrass, and dried shrimp, along with Kaffir lime juice (the limes grow in Singsanong’s yard) and homemade Thai fish sauce. Steamed mussels aren’t a traditional southern Thai dish (“Mussels were on the old menu,” says Singsanong, “and Tui made them better”), but they are irresistible: plump New Zealand greenlips in a rich broth flavored with Thai basil, lemongrass, mint, garlic, and green chiles. Singsanong recommends scooping up some of the broth with a mussel shell when the meat is gone; it’s so flavorful I would have preferred using a great big spoon.

Jitlada has achieved a certain notoriety for a sweet, but fiercely fiery, turmeric-laced shredded-beef curry called khua kling Phat Lung; last year in L.A. Weekly, Jonathan Gold proposed that it was perhaps “the spiciest food you can eat in Los Angeles at the moment.” That may be, but laam talum pook, a chile-infused “wild” curry (one without heat-softening coconut milk) of catfish and small green Thai eggplants, full of garlic, lemongrass, Kaffir lime peel, and black peppercorns still on sprigs, has got to run a close second. It ignites the mouth and burns long—even the raw carrots, cucumber slices,

Tui Sungkamee, in fact, has a skilled, even subtle hand as a chef (though that latter adjective may seem a strange one to use for such palate-startling food), and his control of heat is masterful: There are many varieties of fire in his food—targeted, diffuse, elusive, persistent—and not just one. Jazz Singsanong, meanwhile, brings warmth rather than heat to the dining room, moving from table to table—recommending dishes, taking orders, explaining the food—with a genuine smile and the guileless enthusiasm of someone living out a dream.”and cabbage on ice served alongside as a counterbalance don’t help much—but it leaves a wonderful, complex memory of flavors in the ashes.